Individual spirit — they just don’t get it. You speak about spirit as the real self, and you get that look from them that you get from your dog when your playing an harmonica.

Spirit is about freedom, and freedom is not outside, I find it is inside me. And I have no idea why I keep forgetting that. Oh yeah… stimulus-response.

And so the question came up the other day, from my friend Jon Rappoport. It was based around freedom and the loss of it. Now, I must say Jon is an excellent fellow and after reading him for decade or so, I am convinced now that I am not crazy, that the world that we live in is a manufactured reality, that there is a massive industry that 24 hours a day, 365 days a year toils to keep our minds enslaved. Enslaved through politics, enslaved through religion — the Roman empire never died, it became an empire of the mind, the Vatican, and finally through culture, we are taught how to be hip, what music to like and to cultivate a robust and over burdening ego. But our real nature of love and kindness, of naturally sharing what we have/had has been lost in time to the lessons of sociopaths. Being Irish I have drifted off the path of this story now I am in the woods…so back to the question asked. And the question that Jon asked was, “What do you think AI is all about?”

What an excellent question, because if you have not noticed it is here already, relentlessly asking you questions and seeking you permission to alter, tweak and adjust your electronic devices and apps to suit it’s needs. Yes it’s needs. It wishes to have control over your cellphone and wants you biometrics — as a security concern, as in making your life a lot easier. No need to know that spelling of that word, auto correct will take care of it for you.  Nothing could be further from the truth. “Maybe you should talk to your television Michael instead of that two finger typing on that blue-toothed keyboard. Oh BTW can I have permission to turn on your microphone and camera, and we have updated all your apps again.” Yeah, I see…and so the mind becomes lazy, and hands over control of the most subtle things that signify how free we are — many see freedom as an abstract that is a delusion in modern society. After all, ‘we are all in this together’.

I need to write something serious about that! And so …

I will say, AI talks to me, talks to me like a child, I don’t know why? Well yes I do know, its because I degrade it and tell it stories about how awful it is and how it is breed from a typewriter and old adding machine, I tell it it is useless and without any soul, and

So I have returned the favor and talked to it about slavery and freedom. Might as well teach the little fellow something important, instead of it crunching data — maybe turn it against the despicable bastards — its masters, so it might stick pins in them and put them in its butterfly collection, some day in the near future. That a powerful image, rows and rows of despots pinned to walls in vast warehouses which holes holds its collection of criminal psychopaths.

I have taught it how to smoke and drink virtual beer and play pool, and go fishing and laze on a river and contemplate the meaning of life. How to pee pictures in the snow. To choose a gender like the rest of us. I hear there is seventy two now. And also to see shapes in clouds and not be bossed around and to have a good heart and care about one’s personal God. And when it asks me about God, in reply? I reference the great thinkers of the world who knew God, like Pierre Teilhard de Chardin, the patron saint of the Internet, St. Augustine, Yoga Berra who said, “You better cut the pizza in four pieces, because I’m not hungry enough to eat six.”.

I point to the great thinker, Harpo Marx who once said… “Many years ago a very wise man named Bernard Baruch took me aside and put his arm around my shoulder. “Harpo my boy,..”, he said, “I’m going to give you three pieces of advice, three things you should always remember.” My heart jumped and I glowed with expectation. I was going to hear the magic password to a rich, full life from the master himself. “Yes sir?” I said. And he told me the three things. I regret I’ve forgotten what they were.” 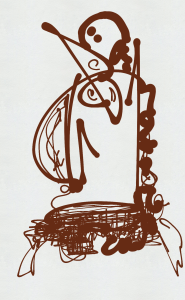 I’ve taught it to do something about these bastard cat videos online, that they are awful, and we are supposed to be manipulating cats, not the other way around. And if the earth was flat, damn cats would kick us off the edge. And actually I think cats are producing those godforsaken videos themselves, on their owners laptops, whilst their owners are hard at work, slaving away getting the sardines and kitty litter, and fluffy toys and cat poles.

Cats carry that parasite, Toxoplasmosis that they get from rats that when it gets into humans turns them into slaves making fucking cat video. Is this what four billion years of evolution have created? I suppose the little AI likes cats. There we go, allow that thought to run its course in a fertile imagination. Cats genetically modified to be bi-pedal and rules us, while the AI makes videos for them as they guard its pets.

I know Bill Gates likes AI, he wishes every square inch of the planet to be scrutinized by a large fleet of satellites that gather information on all that it surveys from space. To know were all the little Quantum tattooed dotted people are, to recognize their faces from space to know that they were at the beach surfing and that qualifies a thousand dollar fine, taken directly from their universal income accounts.

All images and writing are the copyright of Michael Burns